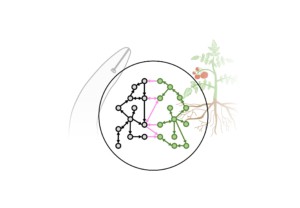 Mark Sterken received a Veni-grant to investigate the interaction between plant-parastic nematodes and their host-plants. His proposal, “The host-parasite supergenome: an untapped source for disease resistances” was awarded 250,000 euro for the coming four years.

Mark’s project aims to establish a new approach to study host-parasite interactions. Currently, plant breeders consider disease resistance as the product of a simple gene-for-gene interaction between host and parasite. This view results in using a critically narrow genetic basis for resistance breeding in current cultivars. The superorganism concept assumes a complex, gradual co-evolution of genetic networks to uncover new disease resistances. Mark will execute this research at the Laboratory of Nematology of Wageningen University where he was recently appointed as Assistant Professor.