A new 5.7 million euro research project will ensure that lettuce will be more resistant to pathogens and climate effects and will grow better in new cultivation systems.  EPS research groups from Utrecht, Wageningen and Leiden Universities will study the characteristics and genetic information of 500 wild and cultivated lettuce species. The goal to combine the best qualities of those lettuce varieties into new varieties that will ultimately end up in our salads. 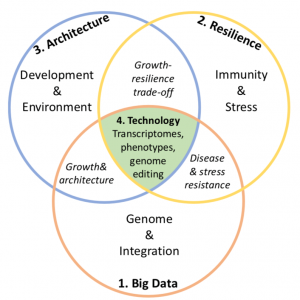 The genomes of a number of important food crops, such as maize and tomato, have been well-studied. Breeders have already benefited greatly from this knowledge by developing new crop varieties. “But for lettuce this has not been the case, even though it is one of the larger vegetable crops’, says project leader Guido van den Ackerveken (Utrecht University). The Dutch Center for Genetic Resources (CGN) has more than 2000 cultivated and wild lettuce species from the Mediterranean and South-West Asia. The LettuceKnow consortium will map a wide range of properties for 500 lettuce lines, to develop a strong knowledge base that will give an enormous boost to research into the growth and resilience of leafy crops.