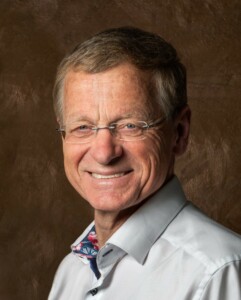 It is hard to comprehend that Jacques is no longer with us. After a long career at the Laboratory of Biochemistry, he had formally retired only in February of this year. As is typical for Jacques though, he was still very actively engaged in a large number of research projects, and came by for a chat on an almost daily basis.

Jacques Vervoort studied Molecular Sciences at the Landbouwhogeschool Wageningen and received his “engineers” (ir.) degree in 1982, for which he spent some time in Georgia (USA). What followed was a PhD with Prof. Franz Müller at the Laboratory of Biochemistry at the Landbouwhogeschool. He received his PhD degree in 1985 and then continued to work at Biochemistry, where in 1998, he became associate professor. Reflecting his creativity and drive in organizing research and attracting funds, he was also co-founder of the start-up Biqualys, supervised a large number of PhD students and became professor at the University of Johannesburg (South Africa) as part of a large collaborative effort.

Jacques career is marked by his love for analytical biochemical techniques. He was always keen to use mass spectrometry and Nuclear Magnetic Resonance spectrometry approaches to identify and quantify molecules in complex biological samples. He took pride in being able to detect the smallest amounts of molecules using new sample preparation methods, measurement techniques or data analysis approaches. Like no other, Jacques understood the importance of bringing molecular processes to light. This was the source of many collaborations with groups in Wageningen, in the Netherlands and elsewhere. Jacques brought analytical biochemical expertise to many projects and groups and helped many with their projects. It would not be strange to hear Jacques speak about peptides in mother’s milk in the morning, metabolites in tea or his beloved wines in the afternoon, hormones in plant cells in the evening, and protein complexes on the weekend. Science was truly a passion for Jacques, whatever time of day or day of the week.

Beyond being a driven and passionate scientist, Jacques took pleasure in teaching students. He was one of the driving founders of the WU Bioinformation Technology curriculum, bringing his wide expertise in protein structure and functions. He could be demanding, and expected students to put in their best efforts, or at least be interested. In doing so, he drove students to achieve their best. When he had their ear, he would go great lengths to also teach about all matters that were important to him, scientific and societal. Likewise, he would offer his opinions and advice to any colleague at the laboratory of Biochemistry, especially those that – like him – were around early in the morning, late in the evening or on weekends. He had a strong sense of what is right and what is wrong and did not shy away from voicing strong opinions. Whether one would agree or not, all Jacques’ words came from his heart, and from his desire to follow what he considered the right way.

We will greatly miss Jacques passionate and active personality, his drive for contributing to science through his expertise, his love for analytical methods, and the casual chats.

Our thoughts go to Ivonne and Jacques’ family.

On behalf of the Laboratory of Biochemistry,